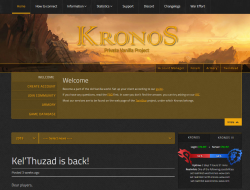 Kronos is a private Vanilla WoW project, under the administration of TwinStar. Here at Kronos we aim to deliver you the most authentic Vanilla experience possible. We pride ourselves on having the highest quality scripts of any Vanilla WoW server, with a focus on all aspects of the game – not just raid content. From perfectly working line of sight, NPC speech text, pathing, pack linking, boss mechanics and more, you can expect an unparalleled attention to detail from us. Kronos is based on the 1.12 patch of WoW server , matching the same release as the client that is used on all private realms.

You will find a few select custom changes on server Kronos, most notably:

Line of Sight (LOS) checks have been completely rewritten, preventing players from being able to attack through world objects (such as trees)
Relearning Talents (respec) has a maximum cost of 5 gold
Dynamic respawn rates

We have worked on every dungeon, from Ragefire Chasm to the Upper Blackrock Spire, reproducing the original content as closely as possible. We’ve replaced mob packs, added the proper linking, and added missing patrol paths. We’ve even implemented the special events in the appropriate dungeons such as the Aurius event in Stratholme, the Scourge Invasion into Stratholme’s Scarlet Bastion, and the Ashbringer event in the vanilla Scarlet Monastery.

Bosses have had their AI and immunities adjusted to ensure an astonishing resemblance to their retail versions. In general, our aim is to have you leave a dungeon saying, “Yes, this is exactly how I remember them!”
Raids

The raid dungeons belong to the very top of our priority list. We are certain that a big part of the community is looking for accurately scripted raid dungeons and we strive to deliver exactly that!

Each boss encounter has been scripted from scratch, and improved until they are flawless.

Trash mobs get an extra treatment as well. We’ve made sure they have the correct immunities to crowd control and spells, and, as usual, added the correct linking and respawn criteria — something that is being overlooked on most other projects.

Kronos has currently released all content up to Ahn’Qiraj (AQ40), with a target of September 2017 for the release of the most coveted raid, Naxxramas.

We’ve put a lot of time into both crafting and gathering professions on Kronos.

Engineering items that fall flat on other servers have been given specific attention here. You’ll find reflectors working against special talents like blackout, teleporters functioning properly, arcanite dragonlings having the proper proc rate, and more. We’ve worked diligently with the community to research proper malfunction rates too, ensuring an authentic experience in both PVP and PVE.

Gathering professions have been looked at and a node spawning system has been written that works independently for each zones, ensuring proper resource spawning across the world.
Twinstar Shop

The Kronos project is under the Twinstar Administration, which relies on donations from players to cover hosting costs. When a player donates to the project, Twinstars are given to players as a thank you for their contribution. Twinstars can be exchanged for novelty rewards such as:

None of the purchasable items or services have an impact on character power or economy, and they cannot be otherwise be obtained in-game.

In addition to the cosmetic item shop, players can list their characters on the Twinstar ‘trade’ or ‘auction’ platform. If a character successfully sells on the Twinstar auction, Twinstars are awarded to the account, which can then be used to purchase characters from other players. We have found this platform to be beneficial for players who want to play a different faction, race, or class.

In conclusion, Kronos exists to provide the best Vanilla WoW experience possible. Years of effort have been put into the core and database, and we continue to make improvements even today. Whether you’re looking for your first private Vanilla WoW sever, or you’re a veteran to the scene, we urge you to give Kronos a try today.

Share This Listing Contact Owner Add to Favorite Report This Listing
Submitted by Your Gaming Dude on Jun-10-2019
Hits: 1880×
Listed on: