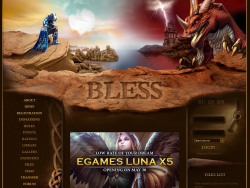 Feel the true Classic MU Online server experience. We invite you to our newest server! Gifts and experience boosts for new players.
MuOnline, created by Korean company Webzen, is one of the most current and developing role-playing online game of 21 century, which in a short period of time has gained tremendous momentum of popularity around the world, irrespective of color or nationality. At the beginning it was created with a focus on the Korean audience, but after a stroke game spread all over Korea, game developers have realized what a masterpiece they have created and allowed the game to other countries, where, without losing speed, it develops and to this day.

MuOnline is not standing still and always improves and that surely pleases the players who do not have to be bored. The game is simple with pleasing interface which is understandable even for beginners in this kind of games, and more experienced players will be able to more effectively use it for their own purposes, high-quality graphics, stunning sound effects, elaborate system of communication between the players, from casual writing in the chat to sending and receiving emails with built-in emotions, that allows your recipient to fully delve into reading your letter.

The game gives you the opportunity to explore a huge world of Mu Continent as alone, destroying monsters, avoiding the more powerful players - the murderers, producing small amounts of gold coins which you can buy better armor or weapons, and the parties, incorporated with other players in a team as well as in large, powerful guilds with a strong friendship and deep hierarchies. If you like elements of the strategy and development from scratch, you can create your own guild and develop it as much as you'd like to see it - powerful and influentive.

In the world of MuOnline players are provided with many exciting events and quests, so every day you will be pleasant with new and powerful adrenalin, which we all are lacking in our boring everyday life. Help Archangel to get into the castle and recover his lost weapon, participiate in a massive battle with hordes of evil monsters, protect the strategically important fortress, or let your guild into battle and capture a castle on a separate map, where you can manage all the Mu Continent. Every day on our server are unique quests with nice prizes for the players, that still lacks diversity and they want everything new.

Our world of MuOnline is distinguished by its unique atmosphere and balanced economy, because you can bargain not only coins but also the special game bonuses. We have the gaming market on the site, where you can bargain and do not be deceived, as it happens in the game. Also on our server there is a unique-designed quests, which allows almost every day introduce something new and unique. We are one of those who value each player and ready to do everything to help him, of course within reasonable limits. We have often held offline contests with real prizes that gives you the opportunity to earn real money by playing your favorite game. We have a functional site with a lot of nice features, services, market, forge, safety equipment and many others.

Our ambitious team of developers and Game Masters lives only in MuOnline and constantly comes up with something totally new and extraordinary from the ordinary everyday things. We expect each of you in our world, to give you the most pleasant conditions for the game and give you the opportunity to be proud that you're playing with us.

New ingame setting that allows to significantly decrease the amount of animations you receive from other players. It will make a dramatic impact on your game performance in Devil Square and other mass events.

We are continue to improve drop on Extreme server. You won't find items with 1 excellent option, now all items will have 2,3,4,5 and if you are very lucky - with 6 options. We are hope, that this changes will give you reason to search boxes and level up your items. Also this changes now work in web-craft system and guild quests.

Pink Mistery Box has been fixed, now it has 50% chance to drop an item +Luck as all other excellent boxes.

Aggressive Siege buff has been updated, now, if the guild successfully defended the castle, at the next siege registered attackers will receive a reinforcing buff: +5% Damage Increase and 2% Damage Absorb and 100 True Damage. If during the siege the last statue was destroyed or wasn’t repaired initially the buff will increase by another 5% Damage, 2% Absorb and 100 True Damage. Now, if you want the siege buff to grow faster, you will have to actually attend sieges, break the gates and destroy that last statue.

Party creation is back on TDM. Magic Gladiator can no longer apply Fire Slash debuff on the allied tam. Prizes for the winning team are now Violet Mistery Boxes.

With activation the Crown during Castle Siege event, Crown switch object will disappear, this system will work the same as with two other switches.

Fixed the bug due to which the character could get, for example, the permanent effect of Ice or mu server Poison.

Share This Listing Contact Owner Add to Favorite Report This Listing
Submitted by Your Gaming Dude on May-27-2019
Hits: 2674×
Listed on: